This week's picture I have had on the blog before, but, I wasn't asking for captions then.  I had to re-post it because I KNOW there are some good captions out there!  :-)

What's your caption for this week? 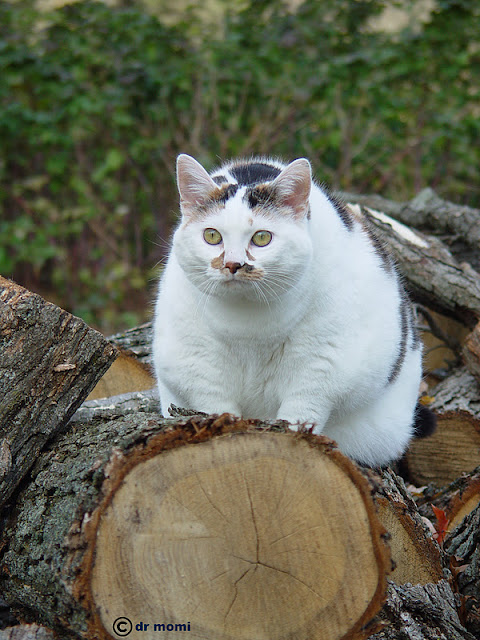 Last week's caption coined by Sharon
over at: Fitzgerald's Family Farm﻿
I also enjoyed:
...look into my eyes....   by Candy C, and
yeah, I look good!  Deal with it.   by labbie1
This is a picture of "Charles" who I believe was "dropped off"
at our house years ago.  We found him on our porch.
He was a huge angora, and about a year after he took up  residence
we decided to "look under there".  Turns out he was a she.
Name was changed to Charlene.  :-)  She was the nicest cat ever.
.....jean
﻿
Posted by dr momi at 12:52 PM

Email ThisBlogThis!Share to TwitterShare to FacebookShare to Pinterest
Labels: Need A Caption

if i calculate correctly, pound for pounce, i should be right on!

So you think taking a Fat Cat to the wood shed is going to be easy?

I can't think of a caption...but I sure think this kitty is cute!

I like what Lisa and Mama Pea posted!! LOL!!

Do you think this wood pile can hold me?

They said the Log Pup was going to be here any minute and all I see is a huge trailer coming my way!

My grandfather was a beaver