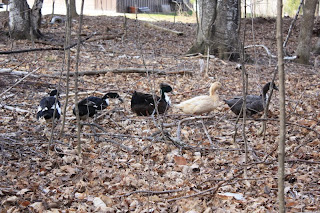 The duck have been confined.......and they don't like it one bit!  They have been allowed to roam free all day long since early spring until just last week.  That's because the garden is just starting to pop up.  In about a month, I'll let them back out to roam.

Rick (my husband) is always in charge of the sweet corn and potatoes in the garden each year.  I weed and take care of tomatoes, cabbage.......well, everything else.  Last year, Rick would come into the house after checking the garden and say things like, "some of that corn didn't germinate, I need to reseed some spots" and "dang, those 2 buck fawns are nibbling on my corn".

I was clueless too, until one day when I watched the ducks go down the corn row just feasting away!


Two days ago he said,  "the corn sure did germinate better this year than last year!"   :-)

When I do let the ducks out, I'm going to try that "video tape" fencing that I read about in this month's Mother Earth News.  Otherwise I have an awful big garden to try to fence in.  :-)

P.S.  ......check out a time the "prisoners" did escape.  http://homesteadingatredtailridge.blogspot.com/2011/03/duck-escapees.html 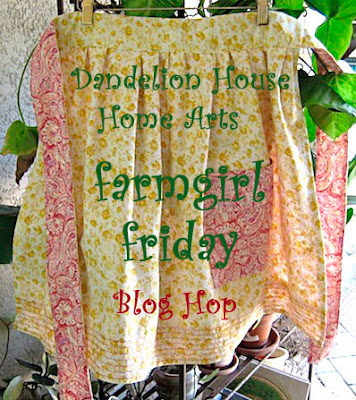 well, i think i'd rather have them eating garden rows that that winter-time treat. :)

LOL!!! Thank you for a slice of life that made me smile silly. "Mum" is the word....shhhhh I'll never tell

It only hurts for a little while!

Kelsie From Our Country Home said...

Poor ducks lol...I lost all my broccoli to my ducks one year...It was ready to harvest and my 3 mother ducks and combined 32 ducklings got into the garden and ate them down to NOTHING.

Good luck with the fencing.
Kelsie

Uh oh, I better keep a watchful eye on my ducklings in case they decide to have a feast on my neighbour's field of corn!

Nancy and Lori.....I LOVE it when everyone laughs along with me!

Kelsie and Peggy.....I could have sworn I read somewhere that ducks just eat the bugs and slugs out of the garden and leave the plants alone....ya right. I'm so glad you reminded me about the broccoli Kelsie! They love that too! For sure I will have to fence in the broccoli lol!

So funny! Wonder if the hubby will figure it out.