Soon To Be Retired 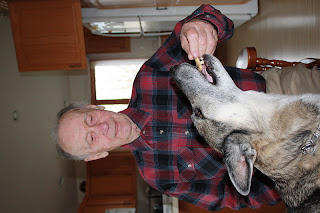 Everybody, I'd like you to meet Bob (it's his birthday today) and his Leader Dog Sonnet.  Bob has been slowly losing his sight.  He has had Sonnet for about 8 years now.  She is 9 1/2 yrs old now, and she quit leading.  It happens that somewhere around 8, 9, 10 years old, the Leader Dogs just decide they don't want to do this anymore.  It's like she isn't paying attention anymore.
So, Bob is getting a new Leader Dog, and I am adopting Sonnet so she can just live the rest of her life as a dog that can run free.  Sonnet was adopted from a humane society and then trained by Leader Dogs For The Blind as a dog guide.  She is German Shepherd and Husky as far as anyone can tell.  She knows me quite well because I watched her two times for an extended amount of time.  Once while Bob had his knee operated on and once when he had a slight heart attack.

In 2 weeks my Future Leader Dog For The Blind, Butsch, is going back to Leader Dogs For The Blind for his formal training.  Anytime after that, Sonnet will be coming to live with us.  I won't be raising any more puppies until Sonnet passes.  Two dogs in the house is all I can handle -- especially with all the "grandchildren traffic" we have here :-)

Sonnet has been "eating good" the past few years.  (Probably a few too many dog biscuits)  I will try to get a bit of that weight off, so her old joints don't suffer too much.

Email ThisBlogThis!Share to TwitterShare to FacebookShare to Pinterest
Labels: dogs

oh, God bless you for taking Sonnet for a good retirement! i am glad her man can get a new dog to lead him. and hopeful Butsch will do well for someone, too!

Maybe he will get Butsch! Sonnet is smiling on that picture!

What a wonderful thing it is you do with the Leader Dogs! I know Sonnet is going to have a wonderful retirement living with you and your family. I think she looks like a real sweetie who's ready for lotsa hugs and play time. We'll all be eager to see more pictures of her as she settles in with you. Bless you, dr momi!!!

She is such a good dog. I waitress at Perkins and Sonnet comes in and lies right under the table. Such a good dog. Glad she will have a life after and I am sure that both her and Bob will miss each other.

Bless you for taking care of such a wonderful dog. She deserves a happy and loving place to live out her days. :)

what a wonderful story....sonnet's a beautiful pup and she's gonna love retirement.

i have a seizure disorder.....a few friends have suggested i get a dog trained to sense when a seizure is coming on as i've had some bad falls. knowing that one was coming would enable me to stay safe. i sure am thinking about it!!

How kind of you to open your home to Sonnet! We are friends with a husband and wife that are both blind, and one of their guide dogs did the same thing when she was about 10-11. They 'retired' her, and she is about 14 years old now and their treasured stay-at-home companion!

This is so nice that you are adopting the aging Sonnet....Great that Bob is getting a new dog!

Thanks for all the wonderful comments everyone. The neat thing about me adopting Sonnet is that Bob will get to see her often. I will bring her for a visit off and on.

Debbie....please continue on the course to getting a seizure dog! It is amazing what the dogs can do.

I love hearing news like that. My passion is dogs and anytime I hear that a dog is getting a new lease on life I am thrilled. I am sure Sonnet will be happy too.